By Konstantina Zoehrer on Wednesday, April 19, 2017 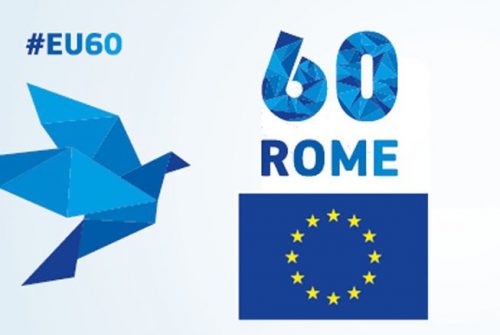 Europe will not be made all at once, or according to a single plan. It will be built through concrete achievements which first create a de facto solidarity.

This quote opens the recent White Paper on the Future of Europe by the European Commission [1]. It is not a popular political statement of today, it a quote by Robert Schuman ( 9 May 1950), one of the founding fathers of what we call today the European Union, and it seems to echo what many European citizens, or to be exact citizens of the EU, wanted to see in the EU.

What the White Paper offers is a basis for discussion, but it fails to create a sense of political vision, although it reflects on the challenges the EU is facing e.g. financial crisis, refugee crisis etc. [2]

The White Paper will be a in the center of discussions during the Rome Summit this week and the following weeks, as Europe is searching for a political vision while celebrating the 60th anniversary of the Treaty of Rome, which is seen as a foundations of one of the longest periods of peace, stability and prosperity in European history. It is mostly associated with the common market and the free movement of people, goods, services and capital, but is the idea of the European Union and its implementation really just about the common market or did Europeans have different expectations?

Wasn’t the Treaty of Rome also a hope for the start of one of the biggest democratic projects of our time establishing a union within the a mosaic of cultures, political believes, economies, social developments, religions, also a union of values like solidarity, equality, liberty, dignity?
The European Union, even though its economic aspect has been in the spotlight, is still a political project, a driving international key player for democracy promotion [3] guided by values of pluralism, rule of law, respect of human rights. Or at least, this is what supporters of the Union argue.

Post 2008, after the outburst of the financial crisis, that challenged not only the common market but also questions the political vision of what we call today, the European Union, the the discussion about a “multi-speed Europe” is present and the impact of it can be seen in the a more nation-driven rather than uniting political discourse, the uprise of the far-right, the increase of populism rhetoric from all the political spectrum, and difficulty to create a European perspective, European solutions to overcome the challenge and stand as an union beyond economic aspects.

The recent refugee crisis and its weak political handling, should be taken seriously into consideration, as it has been misused to foster again sentiments of fear, hate and separation. A closer look into the results of past and upcoming elections in member states, proof the further weakening of the European vision, that emerged after World War II. Not to mention the various existing e.g. Brexit, and just intensively discussed scenarios of other exits of member states e.g. Grexit, that mirror the need for structural, or systemic changes, within the European Union itself and especially in regards to the discourse with and engagement of its citizens.

Some would argue that Europe faces a similar situation as it was in the 30s. It is time about a new or a different vision for the European Union and an European identity [4] beyond the narrow nationalistic and economic narratives, that have been trying to disrupt or disrupted peaceful co-existence for far too long and building what has been at the core of the political entity, and its members, trust, and more specifically trust in democracy, trust in transparency, trust in institutions and solidarity.

European citizens demand a different Europe, civil society is on a rise, new and alternative models or organisation and governance are emerging, in all countries of Europe, EU member states, accession countries, neighbouring regions, influencing the local, national and European agenda. Civil society at large creates new ways of interaction with power, creates synergies in order to protect what the generation of millennials, of generations now in their 20s, 30s and even 40s, took for granted and seem to be under threat because of the weak political commitment from the European Union leaders to an inclusive consensus promoting and strengthening social coherence, rather than a consensus of financial power.

Status quo: The issue of immigration in Greece