By Konstantina Zoehrer on Saturday, December 13, 2014 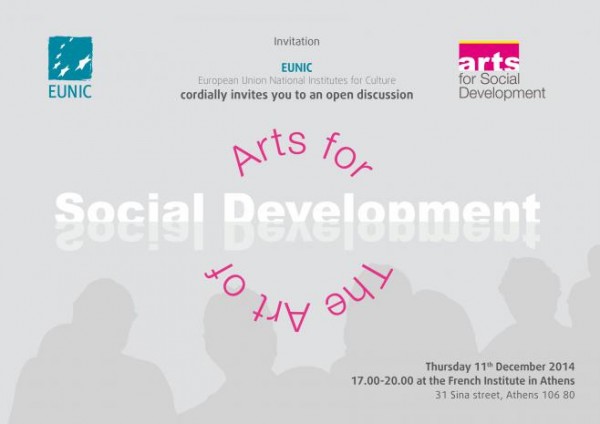 The Arts for Social Development open discussion took place yesterday, taking a look into how the arts and artistic creativity can be used as a force for human, social and economic progress and explored how social enterprise can help local communities drive change, tackle local challenges and raise awareness of major social issues while fostering a greater understanding and appreciation of arts.

I was honoured to be invited by EUNIC Athens Cluster as a speaker and show a different side on how creativity in practice could transform boundaries into opportunities. The Open Discussion was under the umbrella of the Hellenic Ministry of Exterior, the British Council Greece, Hellenic Culture Centre, Swedish Institute at Athens, The Embassy of Cyprus, House of Cyprus, Ιnstituto Cervantes de Atenas, The Austrian Embassy in Athens and The Norwegian Embassy.

Below are my speaker notes:

180 Moires is a very romantic collective. As a group, we share visions of a better world that we would love to create and we wish to play our part in transforming today’s social services, bringing creativity in our everyday lives. We are born within the crisis but our roots are not the crisis. Currently we focus our work on transforming employment, whilst integrating and re-integrating economically inactive groups such as freelancers near or at the poverty line, ages 50+ who do not make sufficient income or people who for various reason have never been employed e.g. housewives. We use techniques like design thinking, experimental learning, sketching etc.

So if you would ask me what connects 180 to this panel, it is creativity towards self-sufficiency. We are using culture as our main language.

Just to give you a taste, even if we are working usually with a different age group: We had past September an interesting collaboration with Anna Lindh Foundation. An educational programme on Creative Entrepreneurship & Active Citizenship. It was about empowering young people from 40 countries of the Euro-Med region and the organisations they were representing, in order to take responsible action for their communities and overcome the current difficult political and socioeconomic conditions.

… Imagine a generation of people who have still so much to give to the younger ones. During our ground research we came across grassroots groups and informal, sometimes on the edge of illegal, groups. What amazed me the most about those groups is their energy, and their consistency to dedicate their time and power to a cause. And then we read about all those stats about unemployment but we discovered also the “not concrete numbers” of informal economy and we asked ourselves, what if all those informal activity would find a way to institutionalise, to become formal and therefore create jobs in what we know as formal traditional economy?

But where shall we start. And here is were our panel theme comes in:
We started to research deeper on the artistic, creative, cultural, educational activities by informal and grassroots groups on a community level.

The amazing thing is that there has been already some mapping work done from initiatives like Omikron Project, who mapped over 400 grassroots groups, around 100 of them are in the field of arts, culture, creative, education.

And from this map and our research we see that informal/grassroots initiatives and creativity practice play a significant role within the local economy. This is not just about making income, this is about being actively part of society, within a community, a neighbourhood. And we can reach out to them more easier because we feel that we speak the same language.

Nothing can replace offline contact or a human conversation.

And the collaboration and dialogue with those groups has been crucial for reaching our target group, without being intrusive to their private sphere. When it comes to outreach we use the networks of other these initiatives We participate also in their activities.

Besides of informal groups we reach out also to other social economy initiatives, like we consider ourselves, who are active in the same field or have a complimentary activity to what we do. Like, for example. «En Ergw» is a social enterprise, like we are, using dram therapy and psychotherapeutic teams free for the unemployed, that aim to help develop psychosocial skills that will reinforce the possibility of finding work and at the same time boost self esteem. And they created the theatrical team «Liminals» with unemployed people, aiming at social awareness of collective benefit issues, like the fight of poverty, social discrimination , stigma, and the protection of the environment etc.

As all groups with a social aim we face the challenge of sustainability. Our main challenge is time. Sometimes we think that we are not fast enough to serve those who might need our social services.

Talks and lectures on Blod.gr