With the Greek public sector unable to provide sufficient aid to those suffering from the economic crisis, third sector initiatives are looking to fill the gap with new models of social entrepreneurship.

A recent change in legislation is enabling the promotion in Greece of new social initiatives to encourage entrepreneurship. A new framework for social economy and social entrepreneurship was written into law in September 2011. Among other provisions, the law creates a distinct legal form of co-operative social enterprise – a civil cooperative with a social cause possessing entrepreneurial capacity. A General Register for Social Economy was created in February 2012.

“The most challenging issue is the sustainability of social ventures and the development of the social entrepreneurship sector in Greece, as it is still not very well known in the business sector” indicates Konstantina Zoehrer, director and cofounder of Loft2Work, a social economy network.

Loft2work is collaborating with the regional authorities in Crete to set up an entrepreneurial social economy space, which will be self-sustained and impact-oriented. Zoehrer says there is a well developed social economy on the island of Crete though, she adds, “Some initiatives are informal or community-based and taking their first steps.”

Meanwhile, some of the more traditional philanthropic organisations are putting measures in place to help alleviate the effects of the economic and social crisis.

“The process has been very challenging; the crisis has not only exacerbated the demand for support, but it has also brought forward a completely new set of issues such as homelessness and undernourishment, which neither the local public nor the non-profit sector have the capacity and know-how to deal with effectively,” according to Lenia Vlavianou of the Stavros Niarchos Foundation (SNF).

New non-profits have emerged as a reaction to the economic troubles. For example, Desmos, a foundation created in November 2011 provides welfare organisations with liquid and illiquid support, to bring efficiency to the act of giving in Greece.

The impact of the newer initiatives is difficult to judge at this stage. As the development of a social entrepreneurship sector is still nascent, the results, both for Greek society and the Greek economy, have yet to be seen. But, the pace at which it is growing does indicate that this new spirit of social and economic solidarity provides at least some hope of easing recent Greek hardship.

Vlavianou at the SNF also expresses a cautious optimism when it comes to the impact of the foundation’s recent investments. “Although we would like to state that our support has had immediate impact, it is too early to draw conclusions and we reserve judgment until after we have had the opportunity to go through an evaluation process,” she says. “However, since the beginning of the year, and as part of this initiative, the SNF has committed grants totalling approximately €28 million in support of numerous not-for-profit organizations around the country, including providing support to the homeless and food aid to schools – programmes which have immediately and directly helped our fellow citizens in greater need.” 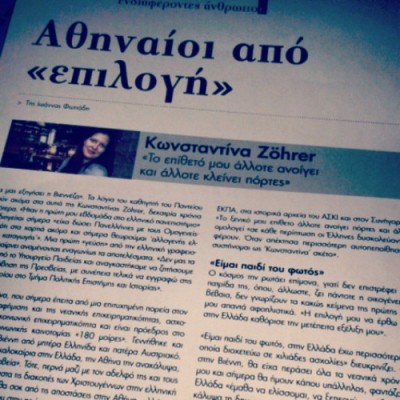