By Konstantina Zoehrer on Sunday, January 15, 2012

During the last months, I am thinking of ways to express my brain flashes through mindful action and to share them. Most of the thoughts are on Greece and how it could re-innovate itself.

Not rebranding, because branding is based also on values and I am afraid that before rebranding Greece, we have to remember some basic steps and ingredients that make Greece, this place so many people call home and draw an honest smile on their faces.

Truth is that I grew up in Vienna and came to Greece during the summer months and ten years ago, initially to try myself at my second «home». Back then, but also now, I believe and insist, with my young approach, that there is more in Greece than the headlines of various newspapers and news keep saying. More than the crisis, bailout, corruption, more than the strikes and the not- functioning public sector, more than the political system, more than all those words dominating not only the news but being a everyday fact in people’s lives seen as unemployment, fear, poverty, a country as a social and economic desert. Stop about the negative lines!

There is this energy around you. You can feel it, when you see the sunset over the volcano of Santorini, walk in the shadow of the Acropolis. When you see the natural light covering the islands and the sound of the sea calming down the country’s people, you know that this place has far more to show and to give than media keep communicating. So, why not focusing on them, because the crisis is everywhere, it is global and not that new, as we might think it is. 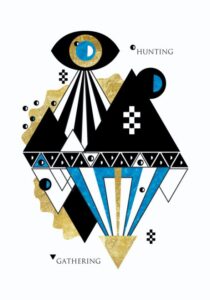 One of my mantras is «Think outside of the box», in our case «Think outside of boarders». The Goddess of the Hunt, GOTH, brings a different eye on what is happening in Greece. Presenting on a daily basis new initiatives, ideas becoming action, food for thought… In other words: A positive point approach, that made me reaching out to Vasilis Xydias, Content Director of GOTH, for a little discussion on GOTH’s mindset for Greece and modern Greek culture.

As the crisis is going on, how do you see Greece from a distance?

Vasilis Xydias: So many thoughts daily run through my head about Greece. I understand and sense the frustration and struggle the people have. I am first generation Greek-American, so I still have family in Greece and so I am aware, but there is a silver lining. To me it’s the raw talent that is held hostage by bureaucracy, and corruption. The seeds are there, they need to rise outside of the current system with the help of the diaspora. This talent consists of artists, designers, the musicians and even the entrepreneurs now rising into the spotlight. They have a confidence that can set the tone for others to follow. Artists are always sure of their work. They never second guess what to do…They will lead a creative revolution for others to be inspired. I truly believe this.

Do you think the diaspora should play a more active role and take action in order to build cultural bridges between Greece and the countries they are based?

Vasilis Xydias: They have to. The diaspora needs to also be brought up to speed on how Greece evolved. It’s not the same country we grew to believe and witness through our parents and grandparents generations. Athens and Thessaloniki have become cultural hot beds for street culture and art. In other words these cities are becoming global and more metropolitan. So the diaspora can and should help but they need to understand there is more to Greece than beaches and partying. But what Greece should do is invite the diaspora, and create drastic incentives and eliminate roadblocks that make it attractive to invest back to Greece. The bridge itself is what’s missing not the people.

Greece, specifically Athens, or even Greeks are like a small village, but it seems that they seem to have forgotten the sense of community that was so strong since ancient times. We have to remember, by “we”, I mean the new generation that creates all those things you are writing about in GOTH.

The crisis in Greece signifies the end of legacy and traditional thinking.

Vasilis Xydias: The crisis in Greece signifies the end of legacy and traditional thinking. It’s over. There is no way the youth of Greece now, with more awareness and influence can live the way it used to be. The world has evolved to a more collaborative and sharing community and the time is now to empower some of these creatives and influential people in Greece and the diaspora. I read an article where a village in Greece has gone back to barter system because traditional economics have failed them. How creative to go to the basics! It works! You helped me and I will help you. In Goddess of the Hunt, we try to find these new fresh ideas that destroy the stereotypes that most people have about us. These people ironically are already connected or know of each others social circle. It’s amazing, the underground network of people that know and respect each other, and the willingness to work together is already happening.

How do you find all those things, that have soul, psychi and meraki, as we say in Greek? How do you keep up to date with the amazing gems e.g. OUGH.gr?

Vasilis Xydias: I have always kept up with the music and art scene in Greece. But I guess I can sift through things pretty quickly. I am very picky and I have short attention span. So maybe that helps? I don’t even know what I am looking for most of the time but I find something I know immediately if it fits into our brand. Bu growing up witnessing the birth of hip hop in the US and listening to it over the years, you get conditioned to dig deeper. What I mean is…Hip hop for many years used sample music from old jazz and funk records. So, when you heard a hook in a song it me want to research the original song the sample is from. So hip hop provided me with a talent to dig deeper than whats in front of you. It’s an art form in of itself. And eventually what happens is you discover more beauty in the surroundings than if the subject itself.

The spark Greece needs now most is low profile and working, exactly as we see it in your posts. I believe that culture as a new mentality but also a sector will play a major role for the country’s present and future. Some speak about establishing an economy of culture. Do you think art can help create PR for the country and its various cities and places?

Vasilis Xydias: It’s been happening since the beginning of time. Art is everywhere and it provides the voice of people in most cases. But now with videos going viral over the internet it’s easier by theory to get noticed if the work is good. It’s how we are succeeding with Goddess of the Hunt. To show not only non-Greeks, but Greeks themselves, that we are doing some amazing things and hopefully they inspire someone to do something or think differently. Art installations that cover old buildings or walls are such a perfect example of taking something old and useless and making it attractive for other to crowd around and admire. They draw people in! We can apply these principles to business in order to move forward and create our new economy. We just need to stay away from taking the easy cheap route out. Creativity takes time, but if many people join this school of thought then the numbers will increase and provide the spark of new ideas. I think we can all agree Greece is in need of rebranding itself. And its daunting to love up our ancient ancestors. But if we don’t start addressing at least one pillar like art we won’t get too far. For example, do more with art education, become a global destination and leader for this. Create a new tourism draw. Stay fresh, stay young and be a little dangerous. 🙂

Patience: What love and writing needs…

On Being a Misfit

What can a box of sand do for you?